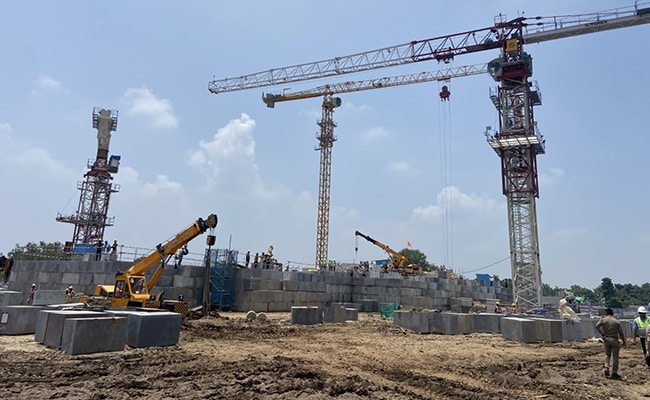 The first floor of the temple is expected to be ready by early 2024.

Two years after Prime Minister Narendra Modi laid the foundation stone for the Ram Temple in Ayodhya, 40 percent of the temple construction work is complete according to engineers at the construction site. The first floor of the temple is expected to be ready by early 2024.

“This is a plinth construction, and that work is progressing fast. We have simultaneously started construction of the actual temple from the ‘Garbha Griha’ or the sanctum sanctorum area. Pink sandstone from Rajasthan is being used for the temple walls,” Jagdeesh, one of the 5 supervising chief engineers employed by the Ram Janmabhoomi trust, told NDTV in an interview at the construction site

The site was opened to the media today. Videos taken by an NDTV team at the site showed massive stones used in the plinth being lifted by huge cranes. The sandstone work was also visible at a distance. “it is a matter of pride to be working at the site,” Utpal, an engineer told NDTV. 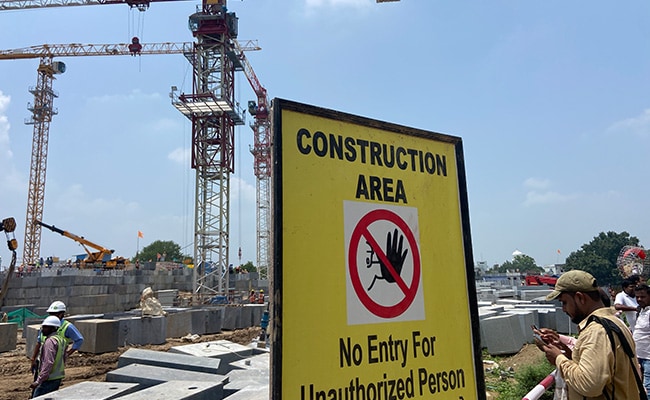 Videos taken by an NDTV team at the site showed massive stones used in the plinth being lifted by huge cranes.

In June this year, Uttar Pradesh Chief Minister Yogi Adityanath took part in a ceremony to lay the foundation stone of the ‘Garbha Griha’ or the sanctum sanctorum of the temple by placing the first carved stone in it.

The sanctum sanctorum will open for devotees just months before the crucial 2024 Lok Sabha election, where the BJP will hope for political benefit.

“For 500 years there was a struggle and that struggle is now heading towards a conclusion. There can be no greater moment of pride for any Indian. Invaders attacked our culture, but in the end India has won,” the chief minister said at the event. Prime Minister Narendra Modi had attended the ‘Bhoomi Pujan’ or the foundation stone laying ceremony for the temple in August 2020 after which construction had started.