While going to Kozhikode on a Rajdhani Express last week, I realised that my iPhone does not have a built-in FM Radio. Even though I have subscribed to Apple Music, I sometimes crave to listen to old Hindi songs on All India Radio (AIR). While searching for an app that tracks the live running status of trains, I accidentally found radio apps for iOS. I had no clue about radio apps and did not know what they did or if they supported local radio stations or not. I downloaded a few radio apps on my iPhone and found them extremely useful, though they only work when you have a stable data connection or Wi-Fi. Still, radio apps are a great way to get informed and entertained. I will tell you everything about how to listen to FM radio on your iPhone and whether or not radio apps are for you.

Unlike Android smartphones, iPhones do not have FM Radio chips built in. Maybe it comes as a shock to some, but that’s true. Older iPhones used to have FM modules right up to the iPhone 6, but they never had an appropriate antenna and amplifier chip to support FM Radio. Even if older iPhones such as the iPhone 4s supported an FM Radio chip, they lacked a radio tuner. Starting with the iPhone 6s, Apple stopped including FM Radio chips in its iPhones.

The issue of Apple not including FM Radio chips in its iPhones was blown out of proportion when the former chairman of US Federal Communications Commission (FCC) Ajit Pai urged Apple to enable FM Radio in iPhones in 2017, but Cupertino responded that their latest phones don’t have FM chips. It is very likely that the FCC was aware that the FM Radio was not present in iPhones- after all, in the US FCC tests all radio devices before they go on sale. The shaming of Apple was unjustified also because there is no regulation in place that requires phone manufacturers to include FM Radios in their smartphones. Can I listen to FM Radio on my iPhone?

As I have mentioned before, radio apps are the only way through which you can listen to FM Radio on your iPhone. There are dozens of radio apps you can find on the Apple App Store, but I found a handful of them useful. I wish iHeartRadio, one of the most popular radio apps in the world, was available in India but it’s limited to the US, Canada, Australia and a few other markets. Pandora Radio is another great option for listening to the radio but again it’s limited to select markets.

The next best option was TuneIn Radio, a free-to-download live radio app. A premium version is also there for Rs 489 a month which gets you access to premium content without any advertisements. The free version, which I opted for, has a selection of local radio stations as well as podcasts and global sports radio stations. The best part of the app is that you can choose the content you want to listen to based on your region and local language. I think where the app shines is reaching out to users with local radio stations such as AIR Kozhikode and Rainbow FM Kochi which appeal to a large population base in Kerala, or Radio Sharda 90.4 FM which is a community radio station that broadcasts in Kashmiri. A screenshot of TuneIn Radio app.

Ever since I started using MyTuner Radio, I have been hooked to the app. The free-to-use radio app gives you a huge number of live stations from around India you can listen to. Upon launch, MyTuner Radio lets you choose exactly what you want to listen to. You can browse local radio stations for different languages and cities, and even podcasts. The best part is the selection of local radio stations is solid; Radio City, Radio Mirchi, AIR Vividh Bharati, Ishq 104.8 FM, All India Radio News, Radio City Ghazal…the list is long and never-ending. The app’s intuitive interface makes it easy to find what you want quickly. The best thing about the app, though, is the ability to use Siri Shortcuts to access the station with the voice assistant. MyTuner Radio is a solid choice for live radio with an enormous music library. It’s easy to use and it’s available for free at the App Store but with a paid subscription (Rs 249 a month) you will be able to get rid of ads, take advantage of a music equaliser and be able to use car mode, which makes it easy to navigate UI while driving. 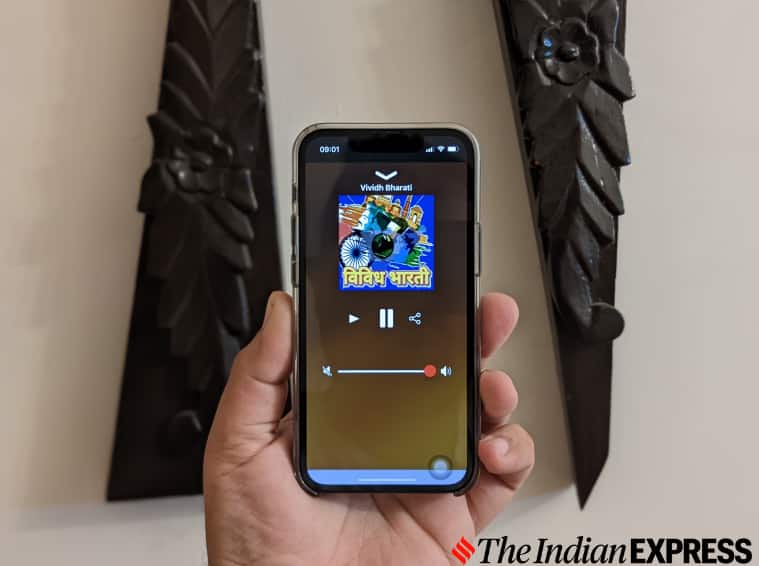 NewsonAir app is a gold mine for retro songs

The NewsonAir app is your go-to platform to listen to AIR Radio stations. The official app by Prasar Bharati, India’s public service broadcaster, is free to download and does not need any subscription. NewsonAir offers an enormous list of channels, including national as well as local programming from different states in India. I, particularly, tune to Vividh Bharati for listening to classic Hindi songs every day when I go for an evening walk. No matter how popular streaming apps or YouTube have become, there’s nostalgia in listening to old Hindi classics, and then there’s Vividh Bharati. Many of us don’t have physical radios anymore, but I am glad that I am still listening to Vividh Bharati in 2022, thanks to digitisation and a large community of people who still love radio.