Realme launched its third tablet in India– the Realme Pad X, which is the most powerful tablet in the company’s existing portfolio. This is no longer just about offering an affordable big-screen experience for digital learning or home entertainment. Instead, the Pad X is a full-fledged 5G tablet with a mid-range chip at the core and exclusive accessories like a keyboard case and a stylus to enhance the experience. But is that enough to justify the price of the Realme Pad X which starts at Rs 19,999? How does the Pad X stack up against its competition? Find out in my full review below. The Realme Pad X is a good-looking device and feels premium in the hand. (Express Photo)

The Realme Pad X comes with solid build quality and this is noticeable the moment you pull it out of the box. The back is plastic, but it does not feel flimsy as such. There are no wobbly or mushy buttons. The tablet feels pretty premium in hand given the price. This is great to see because the build quality is usually one of the first areas to get the axe on affordable tech. The colour and build here also reminded me of the smaller Realme Pad Mini that I tried out a few months ago.

The Pad X comes with a great display for the price. This is a large 10.95-inch tablet with a resolution of 1200 x 2000 pixels. The tablet also makes the most of this on-screen real estate with a number of new software features across Realme UI that let you seamlessly multitask using split screens that you can resize and floating windows that you can drag around.

The screen is also adequately bright for indoor use, but it remains an LCD screen, so while you do get good depth and colour reproduction here, don’t expect AMOLED-level contrast ratios. Watching YouTube or a movie on the Pad X was still enjoyable and apart from the display, this is also thanks to the sound. 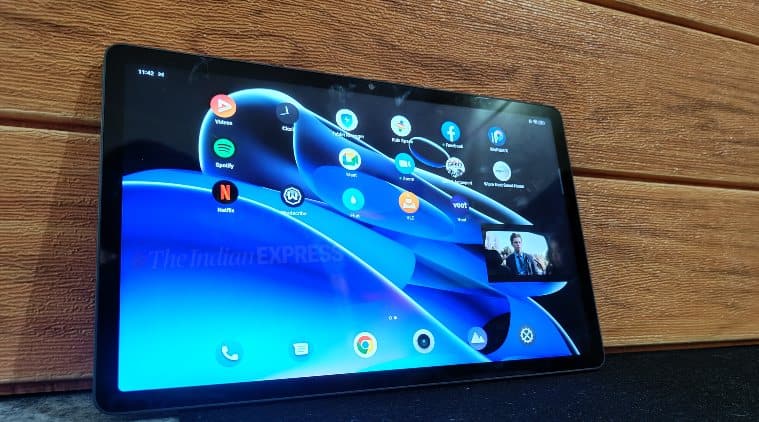 The Realme Pad X has a adequately bright display with good color reproduction for the price. (Image Source: Chetan Nayak/ The Indian Express)

The Realme Pad X come with a quad-speaker setup (four speakers) and they can get really loud, without adding any distortion. The sound is also pretty good for a tablet’s built-in speakers and doesn’t feel tinny or lack bass. This should somewhat make up for the lack of a 3.5mm port here, something that should, in my opinion, be present on all tablets.

The Realme Pad X is pretty good at general, day-to-day performance. Thanks to the Snapdragon 695 chip onboard, you get comparable performance to a mid-budget smartphone here (Rs 15k to Rs 20k),  with the perks of a large display. The Realme Pad X can also game to an extent and if you want, you can play titles like the recently banned BGMI here–which ran at Smooth+Ultra graphics. 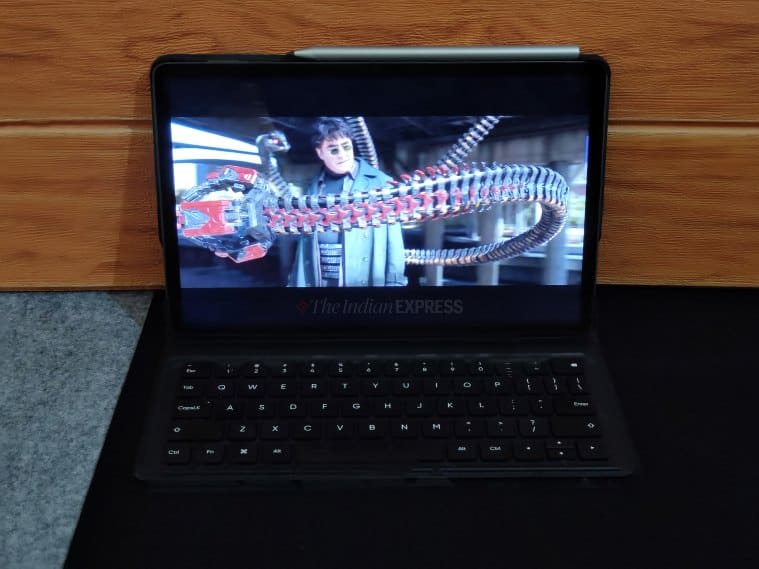 This is also a great device to take your Netflix movie to the bed. (Image Source: Chetan Nayak/ The Indian Express)

However, you will need to keep the price in mind here and maintain realistic expectations when running really resource-intensive apps on the Pad X or playing heavy games. While this is a productivity-driven device, it isn’t exactly one targeted particularly at power users. Another plus point is proper 5G support with 13 bands, which will ensure you can get high-speed data connectivity on this machine when 5G rolls out. There’s also microSD card support, in case you run out of onboard storage.

There is a single 13MP rear and 8MP front camera on the Realme Pad X and both of them get the job done. You can make video calls and join conferences without any quality issues and the rear camera is good enough to scan documents, enjoy some AR (augmented reality) apps and take pictures of your pet doing goofy things. It can also record video at up to 1080p+60fps.

A new Limelight feature also exists here as Realme’s take on Apple’s popular Center-Stage feature. This allows the camera to pan and zoom in/zoom out to incorporate more people in the viewfinder when someone joins you during a video conference.

The Realme Pad X has fairly good battery life and the tablet can last between a full day and two-three days, depending on how often you use it and what you use it for. The tablet has average charging speeds, with the large battery juicing up to 50 per cent in about 50-55 minutes.

The Realme Pad X gets support for two exclusive accessories, a Smart Keyboard worth Rs 4,999 and a Realme Pencil worth Rs 5,499.  The keyboard comes with its own USB type-C port and a tiny on/off switch. Once paired with the tablet, it works seamlessly and has no issues. The tablet will also be able to intelligently detect when the external keyboard is attached and project/remove the on-screen keyboard accordingly. The keyboard has good travel and is comfortable to type on. (Image Source: Chetan Nayak/ The Indian Express)

The Realme Smart Keyboard also has good key travel and those familiar with Windows keyboard shortcuts will be able to use them here while typing or doing any other work.  The Realme Pencil comes with no dedicated button like some higher-end tablets and so, doesn’t offer any spectacular features. It is a simple stylus that lets you draw precisely, doodle and take handwritten notes. The Pencil is great if you have drawing use-cases but I didn’t find myself using it that much while using the tablet otherwise. The good bit is that it can simply be magnetically tethered to the top of the Realme Pad X and it will charge without requiring a separate port or cable. Pretty cool for a tablet at this price point.

The Realme Pad X comes with Android 12-based Realme UI 3.0 and you surprisingly get few preinstalled apps here. We’ve already mentioned the handy multitasking tools to split-screen and implement floating windows and those were pretty good to use and supported most apps without problems. Realme also has a new screen-cast feature that not only lets users cast the display of their Realme phone on one side of the tablet. You can then access this virtual projection of the phone to directly use the phone itself. In this mode, you can also use drag and drop to quickly transfer files to the mobile device from the tablet. This is quite a neat feature. The downside, however, is that this works only with select high-end Realme smartphones like the GT-series. Since I didn’t have one of these phones lying around at the moment, I couldn’t test the feature myself.

For its asking price, the Realme Pad X doesn’t get a lot wrong and while it does have some software optimisations it needs to work on for smoother animations and transitions, especially while multitasking. This is a well-balanced tablet otherwise. If I were to nitpick, I would say that an AMOLED display here would have made this an even sweeter deal.

One improvement I wished for while using the tablet was multiple stand levels on the Realme Smart Keyboard case. You can only attach the tablet and keyboard at a particular angle at the moment and can’t tilt the screen upwards or downwards to your liking as you would be able to on a laptop. Two or three stand-levels here would have been neat.

Verdict: Is the Realme Pad X for you?

If you’re looking for a well-performing tablet under Rs 20,000 that ticks most check boxes if not all, the Realme Pad X is a solid recommendation. It is a more powerful tablet than other devices in the segment and while it can’t quite compete toe-to-toe in terms of sheer performance with higher-end tablets like the new Xiaomi Pad 5, it is priced much lower and also gets an edge with 5G support. The Realme Pad X is currently the tablet to beat under Rs 20,000.