Mumbai: Superstar Shah Rukh Khan shares a strong bond of friendship with his children Aryan, Suhana and AbRam. He often treats his fans by giving a glimpse of his fun equation with his kids.

Recently, the Khan family caught eyeballs with their banter on social media. On Tuesday, Suhana posted a picture with her siblings Aryan and AbRam and captioned it with three monkey emojis. Suhana`s picture with her brothers has garnered several comments and likes. Father Shah Rukh, too, dropped a comment.Calling his kids his “little circus”, he commented, “My little Circus – Big time FOMO!”

Here is the post shared by the actor’s daughter: 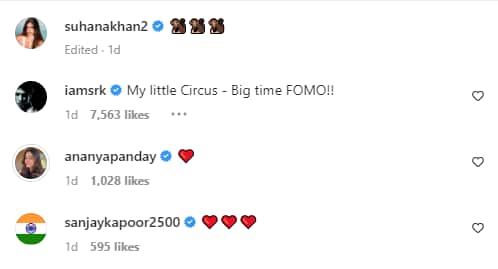 SRK`s manager Pooja Dadlani wrote, “adorable monkeys.”In the image, Suhana is seen wearing a denim strapless top that she teamed with denim shorts. While Aryan wore an olive green T-shirt, a jacket and black jeans, AbRam sported a black hoodie with denim jeans. All of them posed and smiled for the camera.Earlier, the image was shared by Aryan on his Instagram along with two other pictures. With the post, Aryan ended his year-long hiatus on Instagram since he was arrested for the drugs-on-cruise case in October 2021.

SRK commented on Aryan`s post as well, asking him to send him the pictures”Why don`t I have these pictures? Give them to me now,” the actor wrote with a bunch of exclamation marks. Aryan replied to him, “I`ll send them to you the next time I post. So probably in a few years.”

Meanwhile, on the work front, Shah Rukh is all set to return to the silver screen after four years with `Pathaan`, which is set to hit the theatres on January 25, 2023. The film also stars Deepika Padukone and John Abraham.He also has `Dunki` with Taapsee Pannu and `Jawan` with Nayanthara in his kitty.