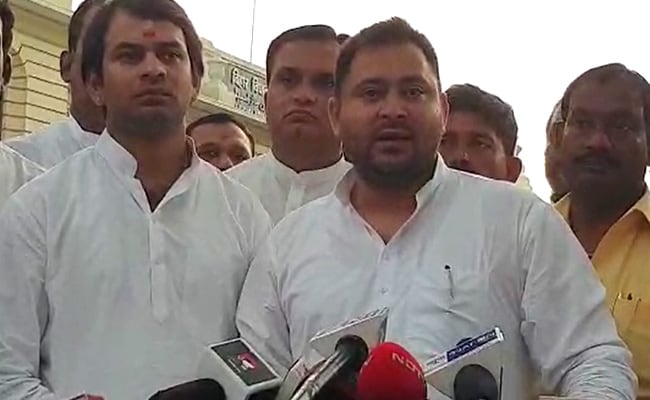 Tejashwi Yadav tweeted, “We never had any opposition from the officers of the agency”.

Tejashwi Yadav, Bihar’s Deputy Chief Minister and chief of Rashtriya Janata Dal, resorted to plain-speaking today on the alleged use of Central investigative agencies as a tool to settle political scores.  Asked about the matter last time, Mr Yadav had responded with sarcasm, saying “I invite the Enforcement Directorate to come and stay”.

His comments came amid a demand for the withdrawal of “general consent” to CBI, so the agency would need the state government’s permission to conduct investigations in the state. The BJP claims the demand is meant to protect corrupt politicians of the ruling alliance.

In a series of tweets today, the 32-year-old who, along with many members of his family, is under the lens of the CBI, said the investigative agencies “try to please their political bosses by ‘raiding’ only the opposition ruled state and its leaders”.

“More than 300 MPs of BJP and more than 1000 MLAs have not been raided by these agencies till date. That’s why we are opposed to their political character,” read a rough translation of one of the Hindi posts.

“We never had any opposition from the officers of the agency and neither do we have. We know that they are complying with the order. But we will continue to oppose the use of CBI as a political instrument,” read another tweet.

Asked about the possibility of his coming under the scanner of the Enforcement Directorate a day after he took oath as Chief Minister Nitish Kumar’s deputy Mr Yadav had shown a flash of black humour.

“Let them (investigating agencies) open an office at my house. I’m issuing an invitation via your channel – ‘ED, CBI, Income Tax, please come and stay as long as you want to. Why go away and come after two months to raid us? Just stay, it’s easier’,” he told NDTV in an exclusive interview.

So far, the CBI has filed cases against Mr Yadav, his father Lalu Yadav, his mother Rabri Devi, and two sisters in the land for jobs scam. After taking oath, Mr Yadav had asserted that he was not scared of the Central investigative agencies.

So far, multiple opposition leaders cutting across party lines have come under the scanner of the CBI and the Enforcement Directorate, making political vendetta a common refrain.

“A lot of allegations were framed, character assassination took place through Godi media but as soon as those alleged corrupt opposition leaders joined BJP they got the certificate of purity. Some became minister and some became chief minister,” read one of the tweets by Mr Yadav.