NEW DELHI: Filmmaker Vivek Agnihotri has strongly reacted to the recent controversy surrounding Aamir Khan’s latest release ‘Laal Singh Chaddha’. The film has been facing a boycott call by a section of people on social media. Vivek, who recently presented his critically-acclaimed ‘The Kashmir Files’ in theatres, called out Bollywood for maintaining a dignified silence when his film was facing a similar situation at the time of its release. Without naming anyone, Vivek continued his tirade against the B-Town celebs and said small films with good content get sabotaged by ‘Dons of Bollywood’.

Vivek took to Twitter and slammed Bollywood and the hypocrisy of those who kept quiet when a section of people ‘ganged up’ against The Kashmir Files at the time of its release. As per Vivek, they are the same people who are now expressing their concern over the boycott call of ‘Laal Singh Chaddha’. His tweets read, “When Good Content Small films are sabotaged, boycotted by the Dons of Bollywood, when their shows are taken away by Multiplexes when critics gang up against small films… nobody thinks of 250 poor people who worked hard on that film. #Bollywood.” 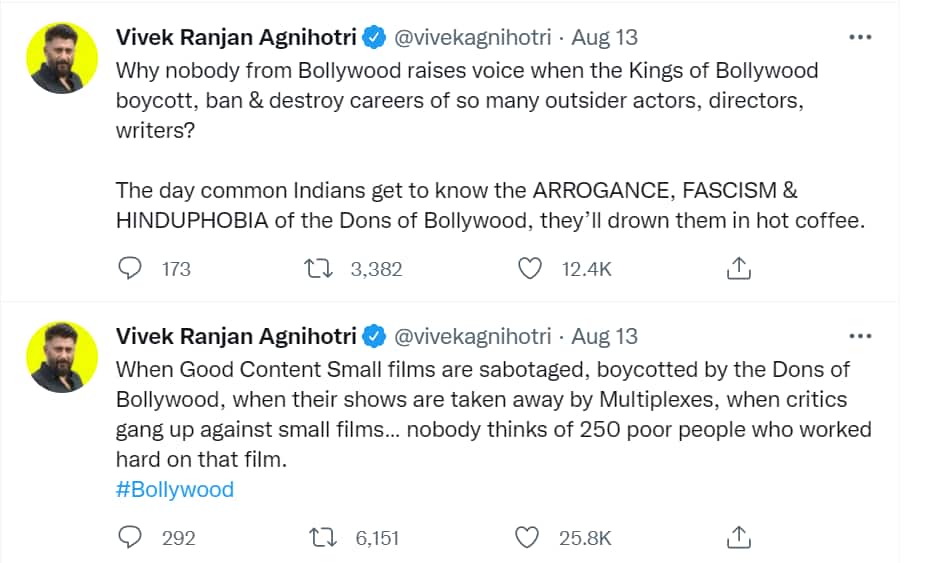 Vivek was indirectly referring to Laal Singh Chaddha star Kareena Kapoor’s statement in an interview, wherein she requested people to watch the movie as “we’ve had 250 people work on this film for two-and-a-half years.” He also took an indirect jibe at Karan Johar and questioned that why no one from the entertainment industry raised their voice when the ‘Kings of Bollywood’ boycott and destroyed the acting careers of outsider actors. He also mentioned ‘hot coffee’ in his tweet, in a clear indication of KJo’s talk show ‘Koffee With Karan’. For the unversed, Karan Johar was brutally trolled by fans of Sushant Singh Rajput and was accused of destroying his career.

Kangana Ranaut had in 2020 too attacked KJo had claimed that he was fulfilling his childhood friend Aditya Chopra, to destroy Sushant Singh’s career. According to Kangana, Aditya signed Sushant under the Yash Raj Films talent agency and made him sign a contract that did not allow him to take up any projects without their consent. She claimed that Aditya did not allow Sushant to be a part of Sanjay Leela Bhansali’s ‘Goliyon Ki Raasleela Ram-Leela’ and ‘Bajirao Mastani’ and made sure that Ranveer Singh got the films instead.

His tweet read, “Why nobody from Bollywood raises voice when the Kings of Bollywood boycott, ban & destroy careers of so many outsider actors, directors, writers? The day common Indians get to know the ARROGANCE, FASCISM & HINDUPHOBIA of the Dons of Bollywood, they’ll drown them in hot coffee.”

Aamir’s movie gets a jolt at the box office. Many from the ecosystem upset at the growing calls to boycott the film Laal Singh Chaddha. But many of them were happy to endorse similar hate poured upon Vivek Agnihotri’s Kashmir Files.
— Rahul Shivshankar (@RShivshankar) August 12, 2022